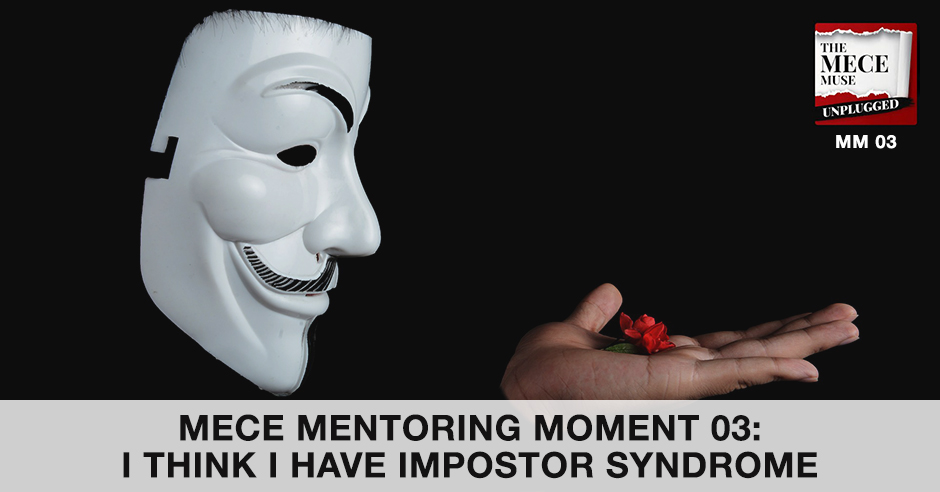 Christie answers an email from a fan that admits they are having performance issues after being promoted to the Manager level.

Listen to the Episode Here:

This is MECE Mentoring Moments, our third one. If you are new to the show, MECE Mentoring Moments are when I have a chance to answer fan mail and give out career advice. Today’s mail was concerning when I saw it. The person did not give us a name so they just signed it, Overwhelmed in Cincinnati. This person’s name is Cincinnati for the purposes of interlude. Cincinnati, thank you so much for writing The MECE Muse Unplugged. They write, “Hi, Christie. Great show. I’m hoping you can help me. I was excited that I had gotten promoted last year to a manager but it has been a rough year. I cannot seem to get anything right. Beforehand, I was always getting praised by my service line leadership, but currently they seem to ignore me. Only reaching out to me or having my career counselor reach out to me when I have done something wrong. I don’t have anyone to turn to because I am afraid things will get worse. I’ve started to develop almost like an imposter syndrome, thinking what if I fail? What if I truly realized that I am not cut out to be a consultant? Any advice would be appreciated. Overwhelmed in Cincinnati.”

Thank you so much, Cincinnati. I’m going to first start out by giving you kudos for having the courage to face your situation. I can tell by the way it’s written. I could tell it took a lot for you to even send me this email. I want to give yourself credit for having the self awareness to realize that something is not right. Sometimes I think us facing those fears up front is the first step to being able to figure out next steps and solve our problems. I read it a couple times and Cincinnati, I realized that you’ve definitely entered a rough patch and it seems a growing pain in your consulting career at this point. When we all face these types of situations, sometimes when we’re in the eye of a storm in our lives, it tends to make us question our core. I felt this is even harder for us to face, particularly like yourself, you mentioned it seems you’re used to being a high performer. This is a first time where for some reason things are not clicking. I thought about the email on my ride home and thinking about some couple of steps that you can take to start to turn the ship around. I’m not giving you this feedback and I have not done this. Full disclosure, my first year as a manager, I struggled a lot as well and I’ll share a little bit of what I experienced. I thought about five steps that you should take to start to turn your situation around.

The first one, you’ve already done it. The fact that you’ve taken that step, you’ve admitted that there’s a problem. While I don’t know the specific context of your situation, I’m going to give you general insights and then feel free, Cincinnati, to send me an email back and if there’s anything else I can help you with or any other specificity you would like to share, I’m happy to follow up. For step two, in that self-awareness process that would take it a step further and say that you need to realize that you are not perfect. You were not born perfect and you’re never going to be perfect. I’m saying this as someone, I’m a recovering perfectionist. I know how hard it is to sometimes come to that realization and it’s in these moments that it hits us hard when we realize we’re not perfect. What made you successful as an analyst level or a consultant level; again I don’t know the specific context of your situation. If you were promoted to manager, you were a younger consultant and the skills that made you successful as a younger consultant are not the same skills that are going to make you successful as a manager. That’s not what’s going to happen. Even at a senior manager or beyond, every level of a career progression, there’s a certain type of new skills that you have to master. On paper you may hear that, people may say that and you’re like, “That makes sense,” but to live it is another thing. I remember when I first got promoted to being a manager; the first year was tough for me as well.

At least for me, again I don’t know your specific situation, but for me I was used to owning, driving and creating my deliverables. I did that well and was able to divvy out the work and let people know what I was doing and I had that nailed down. That was one of the things that made me super successful as a senior consultant. When I became a manager, guess what? At least the firm that I worked at, I had to lead a team and while I lead snippets of teams and work streams but it was when I truly became a manager that I started to actually take on those roles on a regular basis. That’s when I realized that I had to learn, painfully by the way, but I had to learn how to trust and coach people. Sometimes I inherited a team of people that I didn’t know. I had to learn how to trust them and coach them to create the skills for them to create deliverables for them to drive and be able to learn. That was hard that letting go, especially when you have perfectionist tendencies is extremely difficult. The first thing is knowing you’re not perfect.

Step three I would say is figure out the crux of why you were having performance issues. The example that I just gave you that was mine. I knew for me it was a trust thing. It was me coaching, me letting go, letting other people drive. For you, think about what is it that you’re facing? Is this your first project you’re leading a team with? Potentially, are you on a new client? Are you dealing with new leadership? Are you in a complex project environment where there’s a lot of moving parts, a lot of stakeholders and volatile situation? Figure out what is happening and figure out how to unpack the areas that you were having troubles with. Honestly, in order to do that stuff well, it’s always helpful to find someone within your circle, either on your project or within your practice that’s willing to give you candid feedback.

That leads me into step four, which is to schedule time and talk with your leadership. Let them know, talk with your career counselor. Don’t keep reacting to them. In your email you mentioned, you’re afraid to say something because they’re going to come back and say something rudely. I think this is not the time to isolate yourself on an island. You have to go out and seek help. Only the folks around you are going to know what are the things you need to do or to conquer in order to get the support you need. You have to reach out and you have to be up front. You’re going to have to let go and be upfront about the challenges that you are facing. Part of that also is once you’ve started having these conversations, staying connected, staying closely connected and working through whatever the problems you’re going through. Working through those together with your leadership and working together with your career counselor. As much as sometimes I think, consultants don’t realize leadership; they actually may want you to succeed. They want to see that you’re managing. Obviously they promoted you so they inherently have a trust in you. They want to see you successful and they would be more than happy to coach them but sometimes depending on your leaders and your culture, you have to be the one to reach out and tell people you need help. That’s the thing is schedule time. Once you schedule time and you lay it out, you say what’s on your mind, the challenges you’re facing, you’ve automatically reset. You’ve automatically reset because people know where you’re at and you can build from there.

Step five, I’m going to give you step five as an advice because I don’t know your specific situation. Don’t compare yourself to any other managers. I see this because I have a mentee, he shared with me in confidence that he sometimes feel she has an imposter syndrome because he has an accent. He feels the other managers around him are well spoken and it feeds into this narrative that he’s created in his mind that he’s not as good of a manager because he has an accent. I tell them it’s totally made up in your mind. There’s nothing founded about that hypothesis. Not to say that’s what your situation is, the other side is that focus on what you have and think about what are the values and strengths you bring to the table and worked through that. Don’t allow this one hiccup, this one growing pain you have to define your worth, define your ability to deliver or define your role as a consultant. It’s a blimp and you’ll grow from it. What’s important is once you resolved your performance issues; don’t forget to thank the people around you that helped you. I found I’ve made the closest relationships with people within the workplace that has helped me through hard times. Once I figure it out, when I’m having a hard situation and I need to work things through, I reach out to people and I tell people this is what I’m going through, and I work through it with them. It’s the one went around. Everyone wants to see you successful and I know you want to be successful. Definitely make sure to take the time, thank people around you and continue to build on those relationships.

With that, I hope this helps, Cincinnati. I wish you the best and know that if you take these specific steps, and over time you’ll grow back into becoming the rock star that you are known for being. This is MECE Mentoring Moment. We will be releasing Episode 13. It’s our Crossroads episode with Michaela. Michaela got her first consulting offer and we have a conversation about her recruitment process as well as I give her tips on how to make the best of her first role. Thanks for tuning in. This is Christie Lindor signing out for the MECE Muse Unplugged Pop-Up Podcast. Here’s to your journey to greatness.